Now that we’ve got the big job of the interior shell painted, we’ve moved on to all the dozens of little tidbits that come after that. As winter is approaching, I’m also trying to get other minor exterior things completed before it becomes too cold to complete them effectively.

First up was completing the installation of the waste valves. I had installed these previously but had not completed the exterior panel and extension rods to hold it all in place. When I glued up the ABS pipes a few months back, I noticed that on one side I had made the angle of the valve very slightly downward. Ultimately this required me to put a slight bend on the completed valve extension rod to accommodate it. Frustrating, but it is what it is.

Then I installed all of the interior lights (which are 12V low-voltage) and figured out how to attach the dimmer switches – the wiring for these was a bit different than a typical household switch in that it required me to bring a neutral to the dimmer. I sort of knew this, but didn’t think much of it until I went to connect the switch and had to work through the configuration. The basic difference is that the way a 12V dimmer works requires a neutral (three wire) connection, while a regular 120V dimmer does not (two wire.) Fortunately the place where I have the switch has a neutral for other purposes, so I just used that.

I also used this time to insulate and re-install the wheel well covers. There isn’t a lot of space in these, so I had to cut the insulation in half again to make it fit (so, R-3.75.) Here again, a minor oversight – I replaced the water fill port, and the new one sealed so it needed a separate vent. Aesthetically, I stacked them on top of one another. I didn’t give a second thought at the time to the fact that the vent inlet would now sit about one inch above the inner wheel well cover. Probably isn’t a big deal, but may interfere with a drawer in that instance. 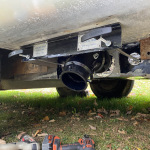 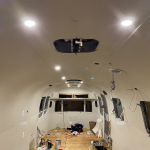 I spent a lot of time thinking about what to do with the hot water system. Originally, there was a 6 gal, propane-fired hot water heater. They still make essentially the same model which I could get for about $450 and it would slip right into the existing cutout. But, I felt there had to be something better. Ultimately, I found that several Airstream folks have been moving towards a unit from Excel that is both vent-free and tankless (on demand.) And then the price of it dropped to $149. Sold! This meant that I could close up the cut-out completely meaning one less opening that can leak. 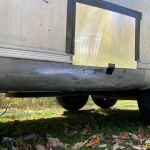 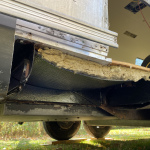 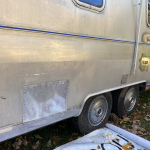 Up next was work on the screens and electric. Mary and I had some discussions about what the best approach was for the screens. Initially I was gung-ho that I wanted them returned to aluminum (they were painted off-white a the factory.) I did a test of paint removal and…it was painful. It became clear quickly that getting the frames cleaned would be an enormous amount of work and they would not really be that great looking anyways. So I bagged that and we looked at paint colors. Ultimately we decided that we would paint all of the metal trim such as door covers, screen frames, etc, using Rustoleum Hammered spray paint in Brown. This quickly covered all flaws in the metal work and, because it wasn’t aluminum color, it didn’t look like we were trying to make it look like original aluminum (one of those pet peeves we have about design.) The knobs on our window controls got a coating of gloss white after a hit of liquid deglosser, and I glued on new fuzzy seal – Airstream changed to black fuzzy seal the week before I ordered (from gray), but I think the black matches better with our colors anyways. the fuzzy seal goes on the frames where the operating arms pass through to close up the space from bugs. 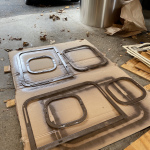 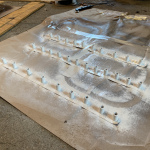 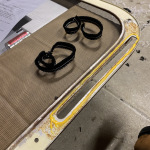 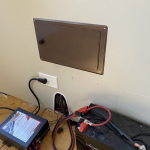 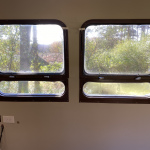 Finishing the 120V electric wiring meant that I no longer had to run an extension cord through the window to power things, so I was eager to get it done too. As mentioned in a previous post, I saved the 12V wiring but replaced all of the 120V with boat cable (basically, wiring made to withstand more of a beating.) Also, the receptacles previously were “speed boxes” – a relatively cheap unit that allows you to cut back the insulation of a wire, stretch it across some channels, and clip the back onto the front, enclosing the wire and making contact. When completed, the unit itself does not need to go into another wall box. While this is a bit simpler, speed boxes are generally junk. So I upgraded to using blue shallow-depth plastic boxes which are then riveted to the interior and Leviton Decora outlets. Fitting everything in was a challenge in its own right, though. It took a good week of working (among the other projects) to get all of the outlets completed. When completed I plugged in the new city power plug (30A SmartPlug) and put a tester in every outlet. I also checked the function of the polarity light, just to make sure it was working as expected. On the 12V side I added some new receptacles – a standard cigarette lighter adapter in one spot, and three really cool USB charging receptacles with power buttons so they are not vampire draws on the battery system. 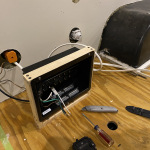 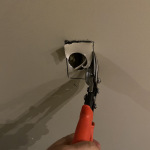 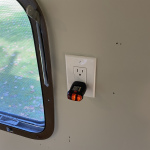 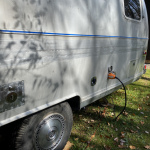 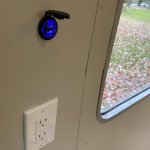 Next up is getting all of the rub rail and belt line trim installed on the exterior, and setting up the plumbing and drain lines.