Now that the Airstream has been moved down to its regular location, we’re moving on to the next steps, which is any final bits needed to close up the ceiling panel and interior painting.

First, we got some good rain (which we needed)…of course it showed four spots that I still had very small leaks in. One near the replaced picture window (rivet leak), one on the door hinge bolts (runs through the threads), one at the back curb side (unclear initially), and one in the stack windows on the street side.

Ultimately, the leak for the picture window and stack windows were straightforward – hitting it with Captain Tolley’s Creeping Crack Cure a few times sealed up wherever it was leaking. The rear curb side turned out to be a loose screw holding in the awning support bracket – upsized the screw for a tight fit then multi-layered sealed it during re-installation with butyl caulk and Trempro 635. The door hinge bolts were more of an issue. I tried multiple things to stop it – covering the bolt heads, more Captain Tolley’s, etc. Nothing would work. I did not want to take them out because the door works and is square and the bolts are a bit rusty. I could be creating more problems than I am solving. Ultimately my solution was to simply deal with the drip leak. Because it ran alongside the aluminum door edge, I used sheet plastic to encase the area all around and created a run for the water to drip down to the belly pan area, where it will evaporate\drain out. Keeping it off the wood floor so it does not rot is the ultimately goal. Success! 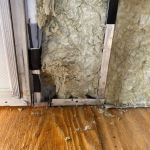 To close up the ceiling I needed to clean up the wiring bundles and complete any items, like the solar panel port, that needed installation. I also had to cut all the holes and prepare the wiring for the LED puck lighting we were installing. This took some time because there are a lot of wires to work with. Ultimately I needed to tuck and zip tie wiring where appropriate, then carefully work insulation into the areas around it. Unlike the original layout, we are also putting the overhead lights on regular switches, and had them in three groups (Front, kitchen\middle, bedroom.) I had pre-ran wires for the switches before we installed the insulation. When that was completed, I spent an evening getting the ceiling panel re-installed, which was a chore in itself. It is also 20 feet long, but it slips into two channels on the ceiling, so it was mostly a task of working it in and not accidentally bending or damaging the channel as you do it. 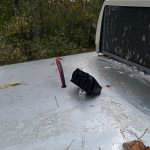 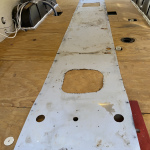 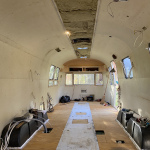 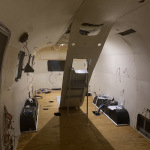 I took the time to do a tape layout on the floor as well to help us visual where things would land. This allows us to think more about the next steps as we move along too. 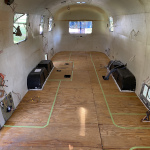 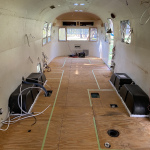 Finally, we’re on to painting. Stephen has been asking and looking for ways he could help – helping do the primer coat turned out to be a great way for him to contribute. We did a single coat of Insl-X Aqua Lock Primer Sealer. The interior walls are aluminum covered in a vinyl. Over the years, the glues in them can surface and become tacky – often called “mouse fur.” So the Aqua Lock is a product to prevent that from happening, and give a good base for paint.

Last, we put on a good coat of finish paint. We are using a color that we we use in our house – a historic preservation color known as “Outlands Subtle Taupe.” It’s a relatively neutral light gray. Getting things painted made a huge difference in how the interior looked – gone were all the color variations and markings from the old interior attachments, and now the whole place is a single, unified color. 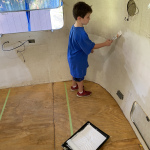 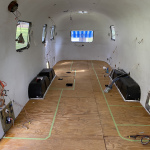 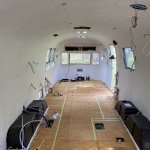 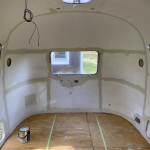 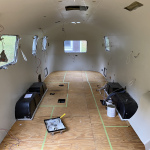 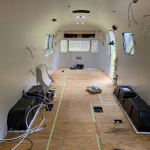 Up next is electrical installation, repair of the rear bumper and more interior finish bits.