With the primary interior painting completed, it’s time to start working on getting the mechanicals in order. Rebuilding a travel trailer is basically like constructing a tiny house – it has all the same components, usually just scaled down to fit and be reasonably portable.

Before I started on those, I did finish up the work on the exterior patches where the old hot water heater was. I got some replacement aluminum rub rail trim and patched it into the hot water and battery compartment patches, then installed the standard blue trim rails around the trailer which (other than polishing likely in the spring) finishes the exterior work. While I was working on this, I did get the bumper back from the car repair shop – it had been bent previously, they straightened it out and braised the aluminum back together – for $26! 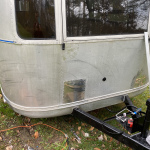 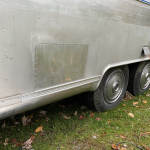 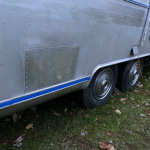 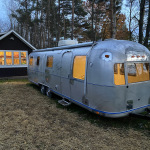 For this renovation, one of the basic rules we follow can be summed up pretty much as: don’t fix what isn’t broken. This applies to the layout of the trailer as much as any pieces we might be able to save. We are not moving walls, expanding bedrooms, switching the location of the shower, etc. We’re basically taking the whole trailer apart, cleaning up what is salvageable, then rebuilding it back the way it was using new materials where necessary. This greatly reduces the engineering needed and for the most part the layout of the trailer was done correctly the first time, I don’t need to second guess it.

The first mechanicals item up was the heating system. The air conditioner in an Airstream is a roof-mounted unit, but the primary heat is a compact propane furnace which has ducts feeding the front and back of the trailer and provides some minor ducts into the floors to warm the tanks (making the trailer a solid 3-season unit, but not a cold weather one.) It also so happens that the duct along the side wall going to the back is used as a structural support for the shower enclosure, but because the original was not always sealed well, you can see it got a little rusty. Fortunately I just sent the specs to a local sheet metal fabricator and they had a part ready in an hour, for $50. I got some new 2 inch round duct to feed heat to the tanks and moved the flanges from the old to the new. The other pieces had some rusty corners, but that was taken care of with some wire brushing, rust dissolver and a coating of cold galvanizing compound. Once these were set, I dry fit everything together to see how it all works and make any adjustments. 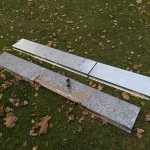 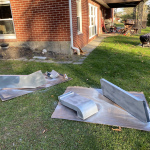 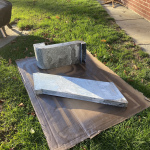 During this time, we were trying to figure out what to do with the doors on the overhead compartment in the front end cap. Ultimately we decided to try painting it and chose a bluish gray tone. I dismantled the unit, painted the parts and re-assembled everything there as well. It turns out we really liked the color contrast, so we’ll be adding more blues inside the trailer as we get to the next steps. 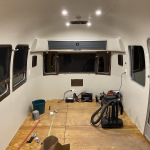 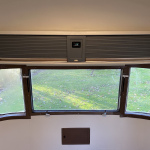 The next mechanical was plumbing. I had previously installed a new exterior city water inlet and now put together a plan for how to lay out all of the plumbing. Other than the initial connections from the inlet port and the tank to the pump, I used PEX piping. PEX is very easy to use and is freeze proof to boot. I did have to use braided hose (per specification) to the pump and from the city water inlet port. Also given that the cost was not very different, I elected to put shut off valves on each connection that feeds a faucet or appliance. The system has a low point drain (helps in winterizing), small accumulator tank (helps minimize pump cycling and prevents “bursts” when turning on water), and connections for kitchen sink, shower, bathroom sink, and toilet. I added stubs going into the rear storage compartment to add some sort of outdoor shower\faucet in the future, though I have not been able to figure out how I want to do that yet, so they are capped. 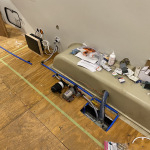 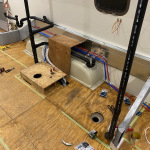 Since the plumbing was coming along, I also was looking ahead to how to attach things to it. I reinstalled the drain lines and vent stacks (salvaged from before!) and also was going to need to clean up the sinks and shower pan. Cleaning the sinks was pretty straightforward since they are stainless steel. They got a cleanup with baking soda paste, then a vinegar rub and finally a touch of olive oil to polish them. The bathtub on the other hand needed a paint job. I picked up a product called “Tough as Tile” – it’s a product you paint on and once cured, is supposed to be super hard. Prep is key here, so this process took several days to complete – making sure the surfaces were all cleaned up and old caulk and residue removed, etc. Ultimately you put it on in several coats, with the finish improving after each one. But it has to be done at very specific intervals per the instructions, meaning I had to pick a day I could do all of it from start to finish. Being that it was painted on with a roller, you can tell if you look closely (and my roller, even though it was not supposed to, had lint that got into the finish…grr.) However, the end result came out pretty good for what it is and once installed it will look decent. In the picture you’ll also see the new Excel on-demand hot water heater. It’s in the same place as the original, but it does not need an external access hole. 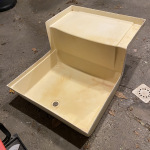 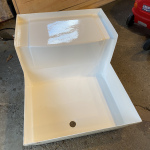 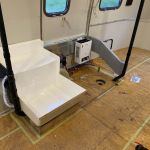 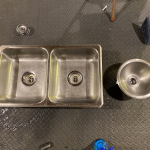 The final mechanical was the gas lines. Just like the water lines, this required a fair bit of planning. You have a primary trunk line (1/2 inch) that then breaks off to individual lines (3/8 inch) feeding each appliance There’s lots of tees, flare nuts, valves, etc. You have to plan it out – I drew a diagram on paper – so you know how many of each different part to order. Gas lines like this use soft refrigerant copper tubing and you use a flaring tool to create the end that connects together. A flare nut (which has to be on the tubing before you flare it!), then compresses the connection together, creating a sealed fit. I installed lines going to the four propane appliances – furnace, stove, refrigerator, and hot water heater and put shut off valves on each one. I then extended from the hot water heater and created an external quick-connect port near the rear. This will come in handy when you want to run a grill. 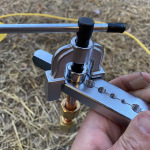 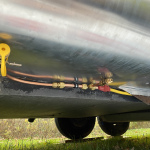 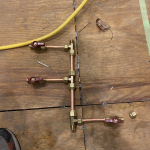 I still have to leak test the mechanical systems, but that should not be a huge issue. Now that the mechanicals are done, its on to planning and building the interior spaces. The really fun part!