It’s been awhile since I posted updates on this project – that’s because we’ve been using the Airstream this last summer. My posts are generally 1-2 months behind where the project is. But I’m going to put up the last few posts to complete this project and show you the (really awesome) results!

In the last post, I detailed how I made the upholstery for the front bench. With that the interior was really coming together and it’s really just a sprint to finish the remaining items on the list so we can use the camper. On that list is a the overhead cabinetry as well as miscellaneous finish work projects.

In our design there are two overhead cabinets – one above the kitchen and one in the rear end cap. I had saved all of the metal extrusions that attached everything to the walls originally, and that served me well – there was an extrusion already bent at the correct angle for attaching the kitchen cabinet to the wall. This cabinet would be pretty straightforward, but I had a few extra things that added complication: first, I did not want the front at a 90 degree angle; second, it had to accept the original exhaust fan assembly; and third, I wanted recessed lighting in the bottom.

Ultimately, I built the cabinet out of 3/4 maple faced plywood for the base, which gave me the thickness to recess the lights and easily attach the front at the correct angle. It also saved me from having to veneer the finished panel. The extrusion to attach the cabinet to the wall, however, accepted 1/4 plywood, and the existing hardware for the exhaust fan assumed 1/4 plywood as well, a problem that was solved with a little router work. I built it as two cabinets then attached them to each other once installed, which made the process a lot easier. I struggled for a bit to figure out how to do the lighting I wanted, but in the end I figured out that I could route a shallow channel in the bottom, put in an LED light strip, then glue a silk ribbon right on the wood to act as a diffuser – the end result looks clean, neat and very seamless. I wired it so there is a on the bottom of the cabinet as well. 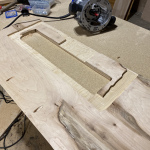 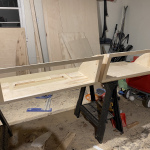 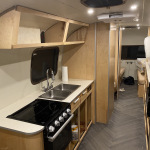 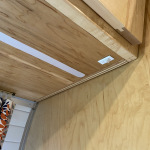 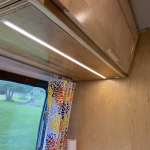 Next up was the rear overhead. This was very complex because of the continouous compound curve that I needed to fit against. I decided to do this cabinet a bit different to give me more flexibility for fitting. I started by assembling a simple frame for the base and attached some aluminum angle to the wall as part of the attachment points. I then made a template out of cardboard for the curve on the bottom side and cut out 1/4 plywood to fit it, and did that in halves. This way I could focus on trimming just the straight cut as I worked it into the cap. Because the cap is plastic, it also flexes as you put everything in, so getting a perfect fit is very difficult. 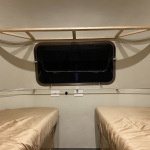 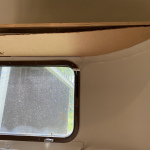 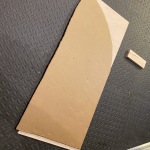 Next I framed up the cabinet itself, taking care to angle the supports to fit inside the curve. The cabinet will not have a back, only a top and bottom, which simplifies these steps somewhat. I built a standard face frame for sliding doors in the front and cut some 3/4 plywood to be fillers to the curves on each side of the face frame. Below you can see the completed assembly, fully installed. 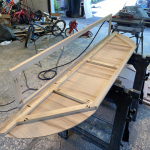 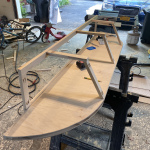 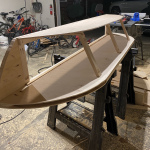 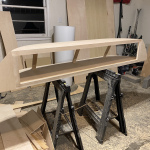 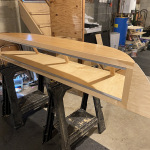 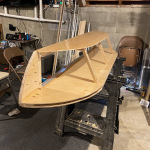 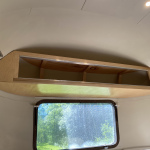 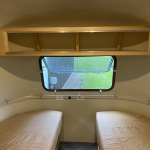 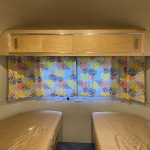 Now on to other finishing projects. The bathroom needed a door. I was determined to create a slider door instead of a hinged one, but that also introduced some questions about how to ensure adequate privacy. I was also determined that the door be reasonably thin (3/4 thickness.) I basically just built another door similar to the cabinet doors so it matched. This also presented a different problem because sliding door hardware typically assumes two things: first, that it’s a pocket door, and second, that the door is roughly 1-1/4 inches in thickness. I adapted the Johnson Hardware 111PD mounting hardware to work and, with some shims, attached the track to the ceiling. I also picked up two Johnson Hardware Guide Posts which I mounted on the floor on each side of the door – this prevents the door from swinging outward freely. I addressed the issue of privacy on the vertical plane of the door by putting some long brush pile weather seal on the wall. Because of the way the door slides the pile (when on the left side) is never actually revealed or visible. For a lock, I made a simple one out of a strip of leather and the same snaps used for the curtains. I attached a snap to the wall, and a length of leather with a mating snap on it – it worked quite well. 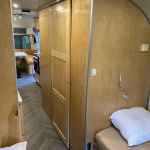 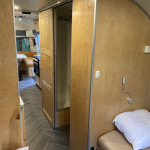 Another thing to address was the various vents for forced air heat and the hot water heater exhaust. For these I used 1×1/2 maple stock, cut it in half, mitered the ends then routed each piece to accept a patterned aluminum vent sheet. Everything was then glued in place and I put them on the wall with recessed aluminum finish screws. 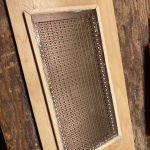 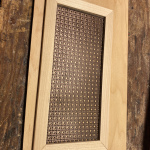 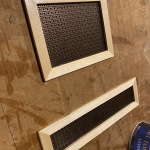 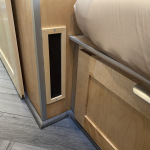 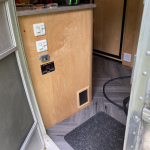 Originally, and in most Airstreams, the beds in the rear have some sort of fabric bumper on the walls. This is for comfort – the fabric is a warm buffer against the cold metal. I whipped up some of these using the same upholstery from the front valences, wrapped them around some leftover plastic from the shower surround which easily flexes, and put the assembly on the wall using snaps. 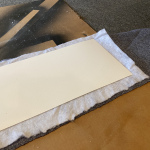 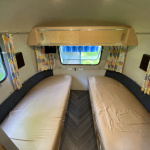 I also wanted a magazine holder, so I built one of those. I have plans to build a spice rack and medicine cabinet too, but those will be winter projects. 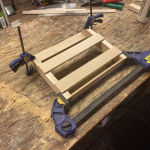 And last, I needed to finish the show moulding for the floor. Generally this is a pretty easy process, but because I built curves into the walls I had to get creative with how to make the moulding work. In the end I went with the kerf method – at first I tried to just do it to the back, so the kerfs would not be visible. That did not work. So I cut it with the kerfs visible on the top and it turned out that when installed they came together enough and, as long as I was consistent in the spacing between each cut, the finished assemble looked nice. The vintage $25 Craigslist band saw I picked up came in real handy for this. With all this done, the only part remaining was how to address the cut ends – the moulding stock was made using a vinyl wrap, so when you have exposed cut ends they are brown fiber board. I figured out that with some gray hammered spray paint and a black sharpie marker I could successfully color the cut ends so they matched the finish. 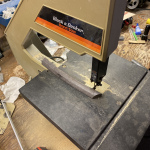 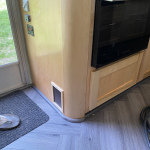 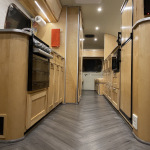 Next up – on to polishing!