A few months ago, after an event at the house, we ran into an issue I had resolved once prior: the kitchen sink was draining incredibly slowly (almost plugged, but not quite.) Back when we first moved in, in November 2012, this same problem occurred. At the time, I called a local drain service and had them do a clean out on the drain line and all was well. I had figured this would hold up for a number of years (more than 2), but apparently that was not to be.

Most of the drain lines in our house are copper pipe – something that would be unusual now, when PVC is used. The plumbing “stack” for the bathrooms is on the other end of the house, and is all copper, but there is a section of drain for the washer, dishwasher, and kitchen sink that runs through the basement. For some reason, this section of drain line was installed with “black pipe,” a mild steel pipe. Turns out, this is bad news for drain pipe. Why? Black pipe easily supports all of the nasty slime that grows inside of drain pipes. It builds up quickly and clogs the pipe. So, the solution was to replace it with new drain pipe – PVC.

This gave me a chance to try out a new tool I had – a reciprocating saw attachment for my Craftsman Bolt-On drill (a really cool system, BTW. Compatible with Black and Decker Matrix line, FYI.) So I cut out the old pipe and built a replacement one in PVC. How plugged was the old pipe? Have a look: 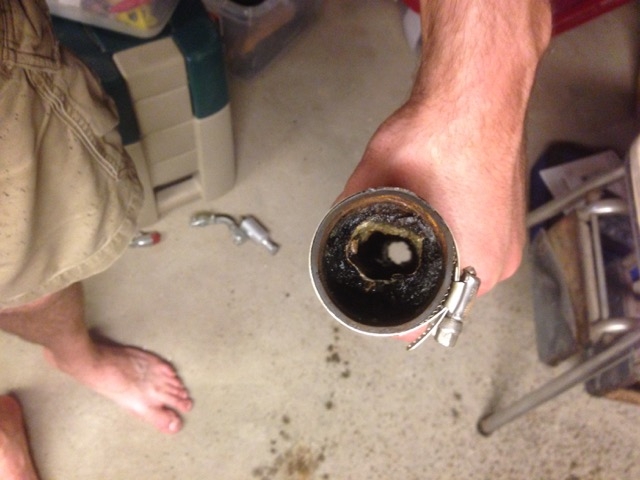 Here is the process and the new pipe. I attached the new PVC to the existing copper stub coming from the wall for the kitchen sink\dishwasher drain, then ran it across the basement to connect to the rest of the PVC junctions. This turned out to be an easy fix – about $60 worth of parts, versus $120 to do the clean out previously. Huzzah! 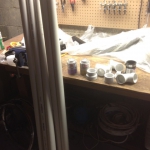 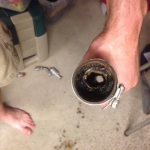 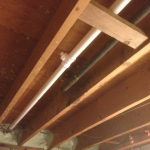 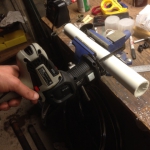