In our previous post, we left with the interior insulation being completed. At this point, we’re now beginning to really put back together all of the various pieces and components that we previously took apart.

The first and biggest part is to get the interior aluminum skins back in and re-attached properly. This starts with the end caps. These are molded plastic parts that fit the complex curves in these areas. This was a multi-person job – my nephew popped over to lend some muscle help to Mary and I so we could get them pushed into place and riveted back up. It was a struggle, but eventually we got it fitted back in tightly and hit (most of) the existing rivet holes. Our choice of insulation might have made this a little more difficult – mineral wool is more dense than fiberglass and while I made sure the batts were flush with the ribs, it’s quite possible that we had to compress them somewhat as we fit things together, meaning more effort on our part.

Hitting those rivet holes brings up a good point – we have been careful while doing disassembly\reassembly to plan out what we can and can’t reuse. Generally if it was metal, it can be cleaned and re-used, and if not it has to be replaced. When it comes to attaching things with rivets, it’s far, far easier to re-use the existing rivet holes. One, it means you are not drilling additional holes into things (leaving other existing holes unfilled) and, two, when attaching the skins and caps back on, hitting the rivet holes help you to know that you got a tight fit that matched the factory without having to do lots of additional measuring and checking.

After the end caps, I steadily worked on installing the panels. The pieces on the ends go on first, and I was able to use the lap markings to make sure I put them on in the correct layered order, which makes them look visually correct (ie, horizontal lines match across the trailer, etc.) These panels are small enough to be a one-person job. Given the new sub flooring that was installed, sometimes I did have to trim the bottom edge of the panels a little for a good fit. There is also a bit of investigate work here – I need to put rivets in to hold the piece up, but some rivet holes are lapped with other pieces that I have yet to put in, so they are left with no rivets until later. This took some time and sometimes I had to remove fresh rivets I put in. 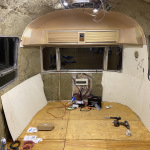 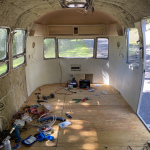 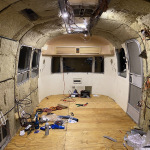 After the panels for the ends are installed, the next step is the long panels running down the sides. You might think that it would be easier to put these panels vertically so they are easier to handle, and it probably is. But Airstream installs them in very long single panels from front to back. I do not know this definitively, but I suspect\assume it has to do with adding structural integrity – the long panels riveted down the length likely add rigidity once attached across multiple ribs. The exterior panels follow the same pattern.

These panels are installed from the bottom up, in three rows on each side. The lowest panel is very straightforward, the middle panel is a mild hassle…but the top panel is an absolute, terrible, no good beast. It fits into a concave curve, is 20 feet long, weighs 100lbs, and wants to flop and bend repeatedly. My nephew came over again to help, along with my brother in law. It took all four of us to do it, and we probably could have used another set of hands still. Getting the top panels up took a lot of effort – we first tried putting them in by attaching the bottom edge and working our way upward, but ultimately could not flex it correctly to hit the rivet holes. Going the reverse direction – pinning the top and working our way down – was more successful. Using this method we got the panels hung and mostly pinned, leaving the lower rivets to be done later by Mary and I. To do those, we had to work rivet by rivet, pushing the panel up into place to get the holes where the panels meet to line up and then line up over the attachment hole in the rib. It was a bear, but it got done.

On the subject of rivets. There are an enormous number of rivets on these interior panels. I bought a bag of 1,000 rivets in bulk…and used them plus at least another 500 or so bought locally in smaller packs. There are a LOT of rivets. Airstream likes to note there are somewhere around 4,000 rivets in the average trailer.

With the panels installed I got prepared for another big step – moving the Airstream from the side of our road into its “regular” home in our backyard. I was a little hesitant to move it around before installing the panels since I knew they added to the rigidity of the unit. A few years ago we built a shed (I really should post “part 2” of that…) and I ran electric to it (50amp) as well, so it offers a great location to park it and offer utility connections. We plan on having the Airstream be used as a guest house for friends when not being used to travel. 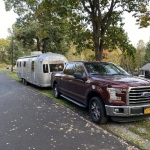 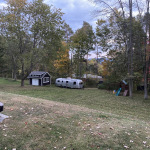 The updates here on the blog are actually several weeks behind where I currently am at – will be posting a bit more frequently as I catch up to my current progress.

Up next, paint and interior bits!