This summer, Mary and I looked at and made a commitment to do something big on the house: We agreed to install a solar power system.

Solar power is getting pretty big everywhere, and here in Upstate New York is no exception. Locally, there is a group called Southern Tier Solar Works that has been promoting home solar power and they put together a very interesting proposition: A buying pool that, as more people got on board, allowed the price per watt (the typical way systems are priced) to drop because of the volume purchased. The company behind the buying pool was a longstanding renewable energy company called ETM Solar Works. Combined with the available Federal and State incentives, the cost of the system fell into a range that made a lot of financial sense for us to pursue. We signed up at the beginning of June, when the price was $4.50/watt, but eventually (as the pool passed the milestones), the cost went down to $4.25/watt. Our system was installed in October. (Click continue to read the rest of the story and see installation pictures.)

There’s a lot of thinking that goes into a solar power system. For those thinking about solar, here’s a rundown of how this works:

1. Pull together your electric bills from the last year or two. This will be needed to help qualification for incentives from the local utility or, in our case, NYSERDA, which is a NYS run program promoting efficiency as well as determining how much electricity you used to size a system appropriately and helping you determine if it makes financial sense to go for it. Our monthly spending on electricity was roughly $100/month, or 750 kilowatt hours per month.

2. Call a professional. It’s possible to do this yourself on the cheap – but it’s not easy. There are a lot of things you probably aren’t going to think about, as well as stuff like passing an inspection for code, etc. If you have the talents, knock yourself out. The installer will evaluate your roof for things such as shade, orientation, size and do a calculation of solar insolation (that is, how much average sunlight is received daily throughout the year for your area.) These allow decisions to be made about how many panels can be installed and, as in our case, show the need for the use of high efficiency panels (333watt per panel) instead of standard (250watt per panel) given the available roof space.

3. The installer will give you a quote back and potentially some options. Our quote was given to us in a “price per watt” format, and our system is 26 333 watt high efficiency panels, for a total of 7,848 watts (or 7.48 kilowatts.) At $4.50 / watt, our quote was $35,316 – but this is far from the price you pay because it does not include incentives. We had an option of what type of inverters to use (inverters take the raw electricity from the roof and convert it to usable electricity for your home.) We chose to install two inverters (instead of just one) and specifically the SunnyBoy 4000-TL model because it has a (relatively) new feature that will power a basement outlet even when the power is out. In our case there was no cost difference for swapping inverters, it was just our preference.

4. Now you need to do some math to figure out if it makes sense for you. This is the hardest part to do because there are several things you need to take into account. You have the quote, the incentives, and another (as yet unmentioned) component known as net metering to figure out your true ongoing cost. The installer’s quote will include some estimates on the financial incentives available and will probably talk to you about how they bring the price of your system down. Currently (until 2016), there is a Federal tax break of 30% of the installed cost of a system. New York State has a tax credit of 25% of the installed cost (capped at $5,000), and NYSERDA at the time of our installation (it has since been decreased) an installation incentive of $1 per watt, of $7,848 off. You calculate by deducting the installation incentive first, then calculate your tax rebates from that number:

But wait – we are also part of a buying pool, Southern Tier Solar Works. It turns out that the pool greatly exceeded it’s goal of 200kW (200,000 watts), so everyone who signed up gets the lowest price – for us that meant a rebate after the fact of $.25/watt, or $1,962 more off the system cost.

There is one last part of this calculation that I have not touched on yet, and that is “net metering.” But, it’s really important. In the most simple terms it comes down to this: Your solar power system should be sized to generate all of the electricity you use during a year but it does not do that at the same time you use it. It generates power during the day (when you’re not home) and you use it at night (when it isn’t generating anything.) With net metering the utility gives you credit for the excess you generate during the day – credits you can use at night (or other times) when your system is not generating power. When the year is over, you should have a “net usage” (amount generated versus amount consumed) that is roughly equal.

OK, whew. That’s a lot to take in for one step. We’re almost done with the math! With all these numbers in hand, you can figure out how much (if anything) it will cost you. A rooftop solar power system will last about 30 years, with a possibility the inverters will need to be replaced once during that time. To calculate payback, you should figure paying off the system over roughly 10-12 years. Using 12 years, our system costs us roughly $85 per month (not counting interest on the home equity loan, which was low in our cost (2%-3%.) We currently pay roughly $100 per month in electricity. So for us, this means that we are very likely to receive a good payback: During the first 12 years while we are paying back the loan, we have swapped our electric bill ($100/mo) for a payment on an asset that we own ($85/mo), and every year after year 12, the cost to us keeps dropping. Looks like a winner to me!

5. Once you’ve determined that it makes sense, look carefully at the financing. The financing offered by the installer seems tempting, but usually carries a ton of hidden fees. We pursued a home equity line of credit which was very inexpensive in our case. Now that you’ve done all this, the exciting time of having your system installed gets underway!

Since installation our system has been working well. Once the connection agreement with the local utility was in place, we also saw the benefits on our utility bill. In the month of November (a month in which, around here, you won’t normally generate as much electricity as you use), our electric bill dropped from $100 to $35. In addition, the system comes with tools to enable you to monitor the electricity generated – we also opted for the tool that shows it in comparison to what we consume (though that isn’t installed yet.) So now we have a very good handle on our home energy usage as well.

Here are shots of the progress of the installation on our house: 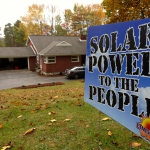 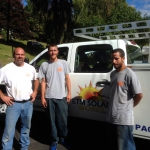 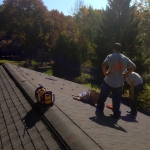 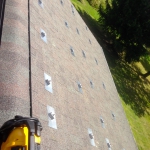 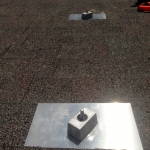 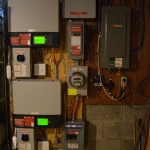 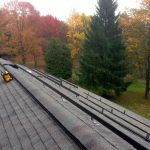 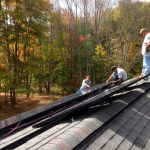 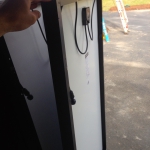 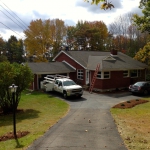 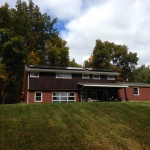 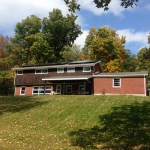 11 thoughts on “Solar Power To The People”