In the previous post, I detailed the work done building the dinette and the bathroom cabinetry. But there’s still a lot of other cabinetry left to do – the kitchen wall, a housing for the refrigerator, a small entertainment system area, microwave cabinet and a big bank of drawers we are referring to as the bar (because it has a bar-height countertop on it.)

Weight is always a strong consideration when building. The original curb weight of this trailer was just shy of 4,700lbs – which for a 31 foot trailer, is not particularly heavy. Airstream made fairly extensive use of (then relatively new) plastics for all sorts of things to cut weight.

I, however, am building most everything out of wood. In most cases, wood is heavier than plastic. Also, the visible pieces are maple – which is a dense, heavy hardwood. So, I spent a lot of time considering construction methods to minimize weight. A lot of people renovating Airstreams head to Home Depot or IKEA and pick up cabinet boxes, chop them up until they fit, and use those. This method works, but the cabinets are heavier. I instead opted to build a series of face frames out of relatively small 1×2 dimensional maple, then attach them using 1×2 select pine to aluminum L channel on the wall. This method means there are no cabinet walls and the support for the cabinetry comes from the multiple attachment points between the wall and face frame. It also makes the entire assembly lightweight.

First up is the refrigerator cabinet. This cabinet is a little unique compared to the others because we are putting in a standard Dometic-brand RV refrigerator and it will have a flue (chimney) requiring venting. These units run on electricity as a primary and propane as a secondary fuel. They also use a different technology to cool than your home fridge. Instead of a compressor for cooling, they are an “absorption” fridge. In this type of fridge, the refrigerant is ammonia and heat is applied to the ammonia as it cycles through the system. Through this process, heat is removed (absorbed) from the fridge interior and pulled outside. Because it only requires heat to function, it can work on propane without any issues. These refrigerators require a reasonably tight box to install and then there are two vents, one at the bottom and one at the top in back. First I built a frame out of pine, and a frame frame out of maple, then applied 1/4 maple plywood to the completed frame. It is installed in place with aluminum F-channel to the wall and any joints are closed up with butyl caulk in the back. The top of this cabinet has a countertop of maple veneer with a fluted aluminum edge. I chose to use maple veneer instead of a laminate (formica) because the upper part of the fridge is not space meant for things like setting drinks down, etc. 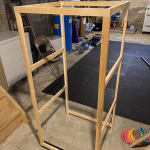 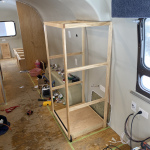 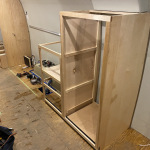 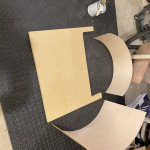 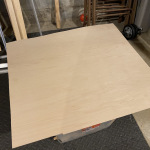 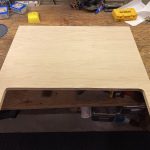 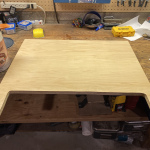 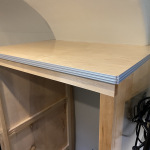 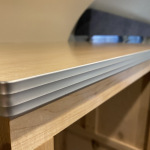 Because the vents for the fridge were pre-existing, I built that cabinet first since its placement effectively determines the precise size of the rest of the cabinetry down the line. The next cabinet houses the microwave, which has a drawer in the middle and hatch on the bottom for kitchen storage. This frame is then directly attached to the frame of the microwave cabinet to make them stable and keep them all straight and in line. 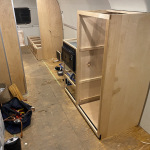 After installing the microwave cabinet I have the dimensions for the bank of drawers. This is a 9-bay opening with six drawer fronts and three drop-open doors to access the utility equipment (breaker panel, water pump, vacuum) at the bottom. When completed, all of the doors will all be shaker style in maple with maple plywood insets.

All of these are done with pocket screw joinery (except the cabinet doors which are just glued after being cut. Because there are no sides to each cabinet, I also needed to install wood rails to mount the drawers slides to. To make this process easier, I attached whole pieces of aluminum angle to the wall for each wood rail to land on. Doing it this way turned out to be much easier than the process I used in the bedroom because I can align the rails with a square as I install them, ensuring they move smoothly. In the bedroom I spent a lot of time adjusting the slides since they only had “end cap” attachments. 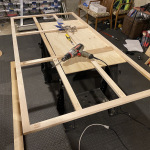 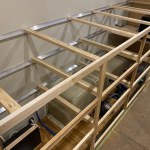 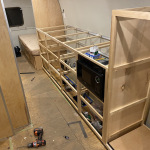 Next, on the other side of the fridge I built a small console for holding the entertainment system – a small TV and the Furrion DVD entertainment system. It’s a single unit that can play DVDs to the TV, has a radio, bluetooth, be surround sound for the TV and pass HDMI signal through to the TV from connected devices. The unit has a two shelf bookcase as well. The shelves have a small lip on the front to prevent things from spilling everywhere during transit, too. Just to make this cabinet complicated, it also has a radius curve identical to the one from the dinette. 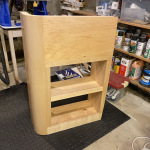 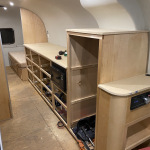 Last up is the kitchen cabinets. This one is also complex – there are technically three parts to this cabinet – the end cabinet with the radius curve, the oven and furnace mounting location, and the sink area. The furnace determines the precise location of the cabinets to start since there needs to be an opening large enough at the bottom to service the unit later. The same process was used to build this as the bar cabinets – maple frame frame with 1×2 pine supports. 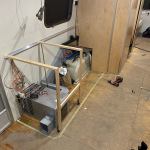 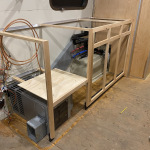 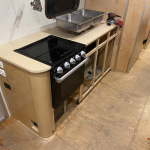 As I was finishing these cabinets, I was also dry fitting the countertops and preparing them for lamination too. In the end, these came out looking the way I expected, too.

Next up is flooring, countertops and drawers!