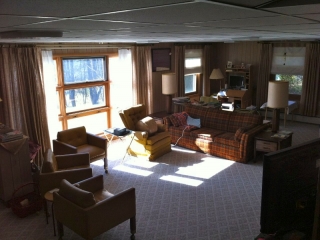 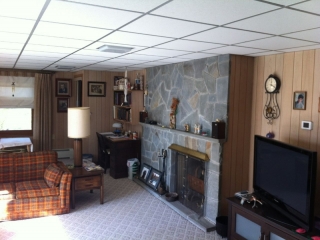 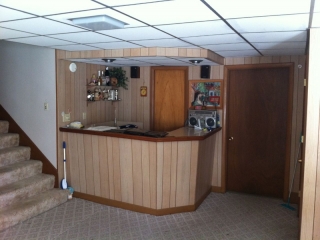 Mary and I are huge fans of hard surface flooring. Our philosophy is to start with a hard surface and use area rugs for the soft areas desired, or to define a space. When built, this house was all hardwood and tile. There was not a shred of carpeting to be found, but over the years my grandparents slowly put carpet over the various floors – fortunately for the wood floors, they just ended up protecting them.

Back to the story at hand though. There are a few issues going on in this room. Chief among them? The concrete slab floor happens to no longer be level…by a lot. Shortly after construction, this floor sank in the middle, creating a bowl like depression. Over the spread of the room, it’s about 2 inches. I have to put little blocks under the feet of the desk to make it level. BUT, the floor has radiant heat built into it – and earlier in the winter, I tested and brought this heating source back online (this is a separate story, but in 2010 my grandmother thought it was broken and some plumbers came in and slapped in baseboard. Very uncool.)

Ultimately, Mary and I want to put tile back on this floor. Since the radiant is working, and the floor is sloping, I have been researching the best way to level this floor. I have some ideas, but they are not on my radar for 1-2 years right now because I want to tackle other projects first and I don’t feel like eating that expense at the moment (it would probably be about $8K.) Because of this, I decided I wanted to go with glue-down low-pile office carpeting as well. It is as close as you get to a hard surface while still having carpet, and because it doesn’t have a pad underneath it is very easy to keep clean. Once the floor is leveled, however, I will be taking the time and money to put in the tile floor that we want.

Preparing this floor was a lot of steps. Not quite as much work as prepping the kitchen floor, but close. First, I had to remove the existing berber and the carpet pad beneath it. Not too bad. After that, the original flooring was exposed – still there, but covered in carpet tack strips and old carpet glue, it was not salvageable. So up this tile came. Fortunately because it had been down so long, it did not take a lot of work to get these tiles up. Generally, they would just pop up when the tile scraper would get underneath one end. So I scraped up the tiles either whole or in a handful of pieces each and got them out of the room. The adhesive for these was clearly petroleum based – the whole room smelled like a fresh asphalt driveway. I cleaned the floor as best I could and patched the major cracks (there weren’t too many.) Finally, prepped for the carpet! I’ve discussed before about asbestos tile as well – taking it up in this fashion (just removing it from the floor and disposing of it) is not dangerous because the asbestos in the tile is not “friable,” though you should take reasonable precautions (wear a dust mask, etc.) It is still dusty. 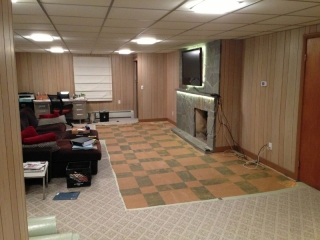 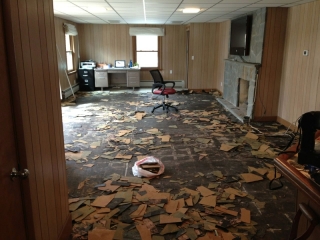 Mary and I decided we would put gray carpeting down on the floor, instead of brown. So off I went to Lowe’s and picked up their inexpensive (yet surprisingly nice quality) gray carpeting and the tools needed to do the installation. (I’m ambitious.) After getting the carpet home, I began to unroll it and lay it out. With Mary’s help, I began cutting the carpet to fit the room. I will assure you it is a pain in the butt to get the corners right without a fair bit of practice and patience. So, 14 hours later (as with all big projects for me) I have new carpet installed in the family room. Yay! But…once on the floor, the carpet is clearly a bluish gray tone, not the dark gray like it was in my hands or in the sample swatches I brought home and put on the ground.

At first I was determined to re-do the carpeting in brown instead. But, over time I realize that the bluish tone actually goes with the bluestone fireplace and since I’m planning on going to tile in 1-2 years it really isn’t worth the hassle to change it. Regardless, it is a significant improvement over what was there and the room looks like a finished, thought-out room instead of a mid-century house with an odd carpet in it. As I like to say, it’s now mid-century compatible.

Along with finished the flooring, we also replaced the window treatments in this room. My grandparents were fans of huge, wall-covering treatments. Mary and I prefer streamlined (or nonexistent, depending on the privacy needed) in order to maximize outside light. The downstairs windows are right at ground level, so they really needed shades for privacy. We ended up getting American Blinds “Top Down Bottom Up” Cellular Shades in a gray color. They mount inside the window frame and can, as the name implies, be adjusted from the top or the bottom to cover any portion of the window you would like. They also provide insulating properties due to their cellular fabric construction. We’re really pleased with them.

Here’s the process, start to finish: 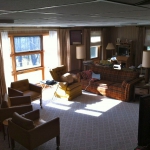 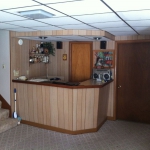 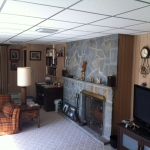 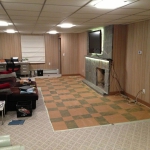 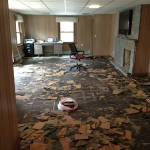 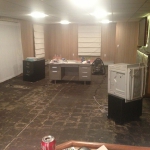 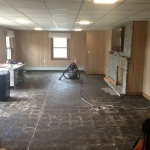 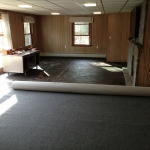 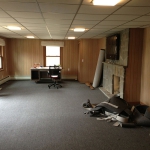 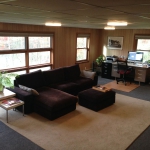 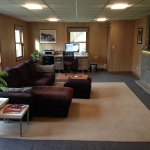 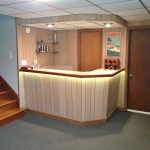 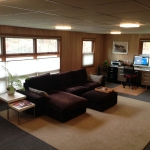 20 thoughts on “Family Room Before and After”