One of the most talked about features in our house are the Sputnik lights. What is a Sputnik light, you might ask? Why only one of the most quintessentially mid-century light fixtures out there. A Sputnik light is any one of a variety of space-age starburst style fixtures. The atomic age feel was inspired by, as you may guess, the space race from the 1950s and 1960s – the light looked sleek and contemporary with polished metal arms…not unlike a certain Soviet satellite. I don’t know if they acquired that name at the time or if they were retro-named years later, but regardless – a Sputnik chandelier and matching sputnik ceiling lights have been a fixture in this house since its construction. Here is a picture from 1966: 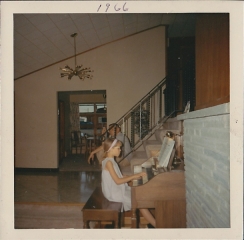 That’s my mother playing the organ, and my grandfather sitting on the stairs. The original Sputnik in the house was, in my Grandmother’s words, one of my Grandfather’s “splurge” purchases because he wanted something fancy. It really set the tone of the room and the house. The fixture in that picture is brass and has 24 arms with “starlite” bulbs, which coincidentally are still available today..

As I mentioned in an earlier post, one of my aunts took the Sputnik fixtures from the house before we moved in. Through some careful research, I found a vendor in Los Angeles that still sells the “classic” style Sputnik chandelier and we purchased a replacement in chrome. They are called Practical Props and they make some truly spectacular reproductions. Not much of a surprise, since they also make and rent props for movies. If you were looking at their sales page under Mod\Mid-Century, we acquired the “SP1” 18-light classic chrome and on the balcony we have the “SPS1” 10-light wall sconce (though we use it as a ceiling fixture.) One of the things that we have been doing around the house is converting the brushed bronze and brass fixtures to all polished chrome. A lot of the original fixtures like the doorknobs were, after 52 years of use, pretty beat. I did save all of them – I am going to put them up for sale on eBay at some point. (14 knobs, as well as vintage exterior knobs and accessories.)

For us, the Sputnik lights were both a connection to the past and the perfect accent piece for the foyer of the house. Especially here in the Eastern US, you just don’t see too many of them around. Here are some more detail shots of our fixtures:

Update: You can see the finished room here. 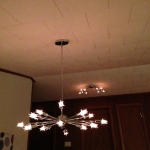 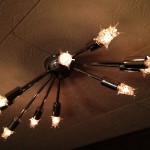 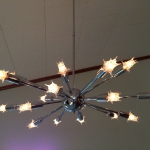 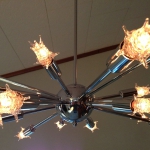 Just wait until you see the pictures of it in the finished room.

7 thoughts on “It’s All About The Sputniks”